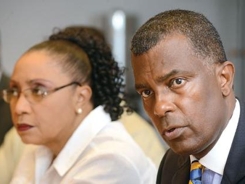 The Bahamas Government has demanded an explanation immediately

On 19th May, at a routine lunch with US Charge Affairs John Dinkelman, he flagged the possibility of a story being released based on the leaks of the former US government employee Edward Snowden and that they would involve The Bahamas and the use of monitoring apparatus in The Bahamas. This was a more specific warning than two warnings that had been earlier given by senior personnel at the U S Embassy here including one by Mr. Dinkelman.

The story became widely available it appears sometime around midday on 19th May and is penned by amongst others Glenn Greenwald, a journalist reportedly based in Brazil who has penned previous works sourced from documents leaked by Mr. Snowden. The Snowden allegations are believed to relate to a period in and around 2011

The article as is material says the following:

“According to documents provided by NSA whistleblower Edward Snowden, the surveillance is part of a top-secret system – code-named SOMALGET – that was implemented without the knowledge or consent of the Bahamian government.

Instead, the agency appears to have used access legally obtained in cooperation with the U.S. Drug Enforcement Administration to open a backdoor to the country’s cellular telephone network, enabling it to covertly record and store the “full-take audio” of every mobile call made to, from and within the Bahamas – and to replay those calls for up to a month..”

The news that there is spying and the collecting of the audio of mobile phone calls of Bahamians by agencies of another country is clearly startling. The facts must be determined. Otherwise, the behavior described would be clearly illegal and on the face of it an abuse of powers. It would also represent a great moral failing on the part of its perpetrators, in addition to illegality which challenges the founding principles of the rule of law. It would also be an invasion of the privacy of the individual, a cherished democratic value and a legal right.

Some explanation is required formally to confirm or deny the truth and authenticity of these allegations.

Following upon the release of the story, the Bahamian Charge in Washington D C contacted the U S Foreign Office for an explanation. We expect that Ambassador Eugene Newry will meet with the U S Foreign Office this afternoon. The Charge of the United States Government’s interest in The Bahamas was summoned to the Foreign Minister this morning.

We have demanded an explanation.

We shall continue to keep the Bahamian people informed as we seek to discover what this is about and what it means.