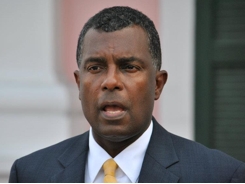 Foreign Affairs Minister Fred Mitchell, in a statement prior to his departure for Paraguay to attend the General Assembly of the Organization of American States (OAS), said the conference “will be the occasion for us to brief colleague ministers on the most recent developments here in The Bahamas with regard to the recent allegations of the recording of Bahamian mobile phone calls by the United States.

“There is to be a meeting between the two sides on this matter and it is my hope that some satisfactory answers will be obtained at that meeting,” he said.

Mitchell said that the Minustry of Foreign Affairs here is gathering “all the pertinent information that we can about the history of this matter and the facts as we know it.

“Following the OAS meeting and my return to the country, it is my expectation that I will be in position to brief Parliament by the time I am to speak on the Budget debate.”

Mitchell said he had also taken note of the position of the main opposition Free National Movement (FNM) on the issue and that the Perry Christie government “takes the matter seriously and will endavour to represent the best interests of Bahamians in this matter.

“We were elected on the theme Believe in Bahamians. The Ministry of Foreign Affairs accepts that as our mandate and marching orders,” he said.