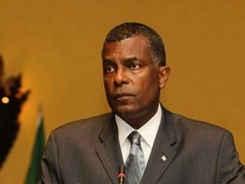 Bahamas expects report from US next week on spy claims

Foreign Affairs Minister Fred Mitchell said on Wednesday that the Bahamian government will ensure that its relationship with the United States remains intact even if it discovers the controversial allegation that its National Security Agency (NSA) is recording and storing audio from every cell phone conversation in The Bahamas is true.

The government is expected to receive a report from the US Department of State next week addressing the claim, said Mitchell during debate on the budget in the House of Assembly.

He said he received a report from the Bahamas Embassy in Washington on Tuesday advising that the US Department of State is working on an official response to the government’s inquiries.

Mitchell said he has the responsibility to fight for the rights of the citizens of The Bahamas despite the power and size of the United States.

“The other word of caution that I would add is that this is the view of the government and this view does not go to the fundamentals of the relationship with the United States of America,” Mitchell said.

“We choose on the basis of available evidence to see this first as an allegation, and secondly, if true, as aberrant rather than a regular occurrence.

“For good or ill, we are joined at the hip. And we have to ensure that relations continue in all the spheres in which good work is done, rather than dwell on the one possible aberrant irritant in the relationship.”

However, Mitchell stressed that if the allegation is true, the activity must cease.

“The particular issue is the following allegation has not been controverted by the United States government,” he pointed out.

“…As of this moment, we are none the wiser as to the truth or otherwise of the allegations.”

In the past several weeks, Mitchell has raised the matter with CARICOM and with the Organization of American States (OAS).

“We have determined that the appropriate forum on a multi-lateral basis is the Organization of American States,” he said. “At the moment, the issue is being discussed bilaterally.

“There have been many views espoused but almost universally there is the view that we must know the truth of these allegations and that if this is indeed the fact then it must cease.”

Mitchell noted that some people do not care whether they are being monitored, as they have nothing to hide.

He noted there are others who say the United States is too big and too powerful for The Bahamas to take on.

However, Mitchell said The Bahamas can at least “challenge the great power to live up to the tenets of its own creed and the morality of its own principles”.

The NSA reported most on The Bahamas during the four-month period leading up to the May 7, 2012, general election, when compared to other reporting periods outlined in confidential documents leaked by former NSA analyst Edward Snowden.

Those documents do not reflect any reporting from The Bahamas prior to January 2012, but it is unclear whether this means the program did not operate in this country ahead of that period.