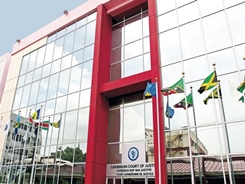 HOUSE Speaker Michael Peart had to cast a vote on a Bill amending the Constitution to repeal provisions relating to appeals to the Privy Council yesterday to ensure the Government a twothirds majority to pass it.

In a rare display of partisan loyalty, all 63 members of Parliament turned up for the vote, the second attempt by a People’s National Party (PNP) majority in the legislature to Jamaica’s final appellate process from the Judicial Committee of the Privy Council in England (JCPC) to a regional court 182 years its junior, the 10-year-old Caribbean Court of Justice (CCJ).

MPs stuck rigidly to party lines with the vote on each Bill ending up at 41 for the Government (minus the Speaker’s) and 21 for the Opposition Jamaica Labour Party (JLP), which is its full slate.

Two of the Bills — an Act making provisions for establishing the CCJ as a superior court of record with appellate jurisdiction; and an Act to Amend the Judicature (Appellate Jurisdiction) Act, to repeal provisions for appeals to the Privy Council, and exclude any appeals to the Privy Council instituted prior to implementation of the CCJ — did not require the two-thirds majority.

However, the third Bill, which sought to amend section 110 of the Constitution of Jamaica to repeal provisions for appeals to the JCPC and replace them with provisions establishing the CCJ as Jamaica’s final court, required a two-thirds majority, forcing the speaker’s vote.

The Bills will now be sent to the Senate, where the Government is denied a numerical two-thirds advantage, and would need the support of at least one Opposition member to clear that hurdle.

But yesterday’s results came as no surprise as, while the governing PNP has consistently supported replacing the JCPC with the CCJ via a twothirds majority in Parliament, the JLP has been equally consistent that a referendum should be held to allow Jamaican electors to decide the issue and more deeply entrench the appellate court in the Constitution.

Prime Minister Portia Simpson Miller, speaking in the debate last November, had suggested that the three-month constitutional delay in voting on the Bills was enough time for the Opposition to reflect “and do the honourable and logical thing”.

According to Simpson Miller, “the positions taken by the Opposition over these years have shown great inconsistency”. She said she held out hope for an eventual bipartisan approach to the Bills.

Holness responded that the approach being suggested by Simpson Miller was completely out of the question. “We feel that there must be a referendum to decide a new court, and we are not changing from that,” Holness insisted. Caricom countries, including Jamaica, accept the CCJ’s original jurisdiction of interpreting and applying the Revised Treaty of Chaguaramas (which established Caricom).

It remains an international court with compulsory and exclusive jurisdiction in respect of the interpretation of the treaty. In its appellate jurisdiction, the CCJ would hear appeals as Jamaica’s court of last resort in both civil and criminal matters, after ceasing to allow appeals to the JCPC.

However, Trinidad and Tobago, which hosts the CCJ’s headquarters in Port of Spain, has not signed on to its final appellate authority.